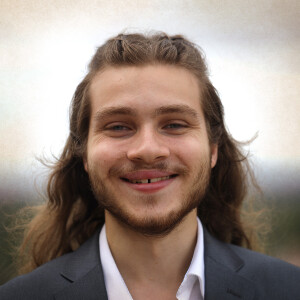 Benjamin Johnson is a composer, arranger, and instrumentalist based in Southern California. He recently graduated from Concordia University Irvine with a degree in Music Composition. During his time at Concordia he’s had the privilege to study with Professor Steve Young in Composition, Dr. Tom Mueller in Composition and Organ, Dr. Stephanie Ginnings and Dr. Erika Wilsen in Horn, Dr. Donavan Raitt in Guitar, and Professor Robert Macneil in voice. He performed as principal horn in the Concordia Symphony Orchestra and the Concordia Wind Orchestra. Additionally, he sang with the Concordia Choir, played trumpet in the big band, and guitar in the Americana ensemble.

From a young age, music has been one of Ben’s greatest joys which drove him to play in a variety of ensembles, gaining experience on many different instruments. This fueled his fascination with writing which brought him to Concordia to study composition. Ben plans to pursue a career in film scoring and performance with eventual plans for graduate studies.

Home | About Us | Our Staff